Getting “Emotional” Over the Paycheck Fairness Act

"Sen. Barbara Mikulski (D-Md.) ripped apart the stereotype that women are 'too emotional' on Wednesday, moments after Senate Republicans blocked a procedural motion to advance the Paycheck Fairness Act. ...

"Mikulski sponsored the Paycheck Fairness Act, which would cut into the gender pay gap by holding employers more accountable for wage discrimination against women. An effort to begin debate on the measure failed 53-44, with all Republicans and Sen. Angus King (I-Maine) voting against the cloture motion. All Democrats and Sen. Bernie Sanders (I-Vt.) voted in favor of advancing the bill.

"Mikulski's comments were not just directed toward her Republican colleagues, but were also a thinly-veiled shot at former CIA director Michael Hayden. On Sunday, Hayden suggested that Sen. Dianne Feinstein (D-Calif.) was 'too emotional' to have produced a Senate Intelligence Committee report on the CIA's use of torture post-Sept. 11." 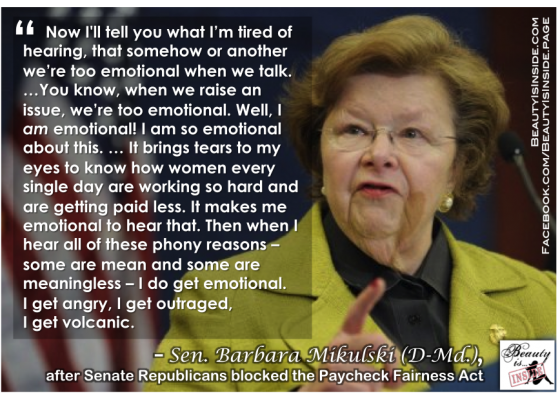