“This Is a Catholic Country”

This is what can happen when a country (Ireland, in this case) allows the religious beliefs of some to trump a woman's right to terminate a pregnancy: Savita Halappanavar, 31, was a dentist and was 17 weeks pregnant. She was miscarrying, but was refused an abortion even after her health started to fail. Ultimately, the fetus died inside her, and then she died shortly after from blood poisoning. It's simply disgusting how self-righteous ideology caused this woman's death:

"Savita was really in agony. She was very upset, but she accepted she was losing the baby. ... When the consultant came on the ward rounds on Monday morning, Savita asked if they could not save the baby, could they induce to end the pregnancy? The consultant said: `As long as there is a fetal heartbeat, we can't do anything.' Again on Tuesday morning ... the consultant said it was the law, that this is a Catholic country." 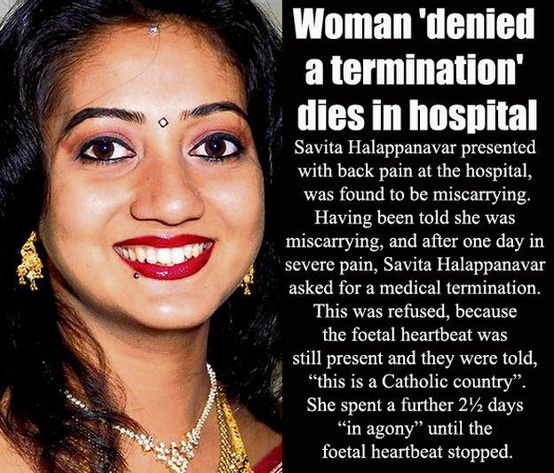