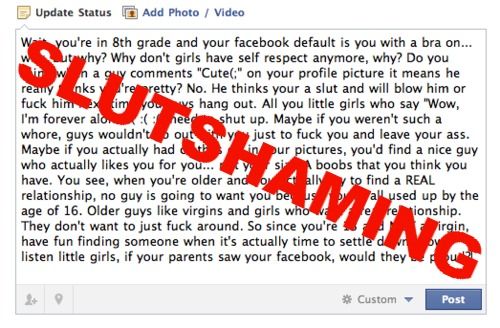 In today's Depressing News of the Day, you may want to know (or not) that there's a Facebook page called “12 Year Old Sluts”. Fans of that page post pictures of young girls who dress or act "too sexy" or even post "sexy" pictures of themselves. You can imagine what happens next:

It features, among other jokes and memes, the kind of idiotic 'sexyface' pictures pre-teen girls take of themselves in the bathroom mirror. The founders of the page encourage their commentariat to 'put these sluts in their place,' with shame tactics that would make the meanest mean girls blush.

Wow -- let's go slut-shame some little girls. What upstanding, compassionate human beings we are. Why do sluts need to be put "in their place" in the first place? Well, it's partly because kids can be insecure little bullies. But it's also because they've somehow internalized that female sexuality is threatening and shame is a powerful tool to dampen it.

On the "12 Year Old Sluts" Facebook page, a less-conventionally attractive girl made the mistake of posting a picture of herself in the typical bathroom-mirror-camera-phone pose, and the insults came pouring in.

The crux of the problem for this girl ... is that she’s stuck between a rock and a hard place. On one side, there is the crushing pressure to be sexually desirable. She is aware of this pressure even before she caves to it, and at a much younger age than adults would like to believe. ... On the other side, [she] knows that she loses the desirability game if she caves to the desires she has inspired. ... [She] intuitively understands that she loses hers if people think she’s too accessible.

We're damned if we're too sexy and damned if we're not sexy enough. It's a trap. So why would she post that picture then? Why would a girl put herself in the position of being publicly critiqued and ridiculed by cruel internet strangers? It's not unlike the reasons why teenage girls and adult women would post their pictures to websites like Hot or Not (feel free to Google it if you want, but I'd prefer not to give them the traffic), or hundreds if not thousands of other online forums. Many girls -- and women -- act in desperate ways in that elusive search for validation.

As girls grow up, we learn that it's important to be pretty little princesses and to be sweet and nice to others. This teaches us that our value lies in our appearance and our ability to please. Boys learn to be tough, confident, but unemotional -- which of course has its own downside. It's incredibly unfair to teach girls that they're supposed to be pretty and pleasing, and then turn around and punish them for doing exactly that. Amanda Todd is a heartbreaking example of this. Amanda was a 15-year-old who some called a "slut" after topless pictures of her were made public by the GROWN MAN who flattered her into posting them for him. This asshole-who-deserves-to-be-in-jail stalked her and made true on his threat to share them with her peers after she wouldn't give the perv a "show". She ended up committing suicide due to the torment and bullying. If that weren't bad enough, the slut-shaming has continued after her death. The pressure to be sexy, the need to be admired, and shaming a girl for doing just that can have tragic consequences.

The wiggle room between the rock and the hard place—that sweet spot between being wanted and being respected—is all but non-existent. It is a sliver, a tiny wedge, the narrowest of alleys. Adult women spend years trying to find it, alternating between extremes, recalibrating, shooting for appreciation without denigration. Look at me, but not for too long. Want me, but don’t try so hard. Think that I’m beautiful, but know that I’m classy. But not too classy. Lady in the street, freak in the bed. You know the drill. ... But teenagers? Teenagers have it worst of all. Not only do the rock and the hard place still matter more than anything, but they have yet to fully develop the ability to scope out long-term ramifications. Their skins are still baby thin and easily pierced. They want to be noticed and ignored, be thought exceptional and average, all at the same time.

It's a balancing act between two extremes -- the respectable virgin and the unrespectable* whore. And it's all bullshit.

*I looked up "unrespectable" to make sure it was a word and here's the first response that popped up (you can't make this shit up):

"A respectable woman". The problem isn't just one immature and mean Facebook page. You know there's a problem with society when even the dictionary is a slut-shamer.