This Woman Has Rights Too

I've recently started posting a few original memes here and on my Facebook fan page (which has over 2,700 fans -- so please check it out!). As an artist, I enjoy creating these images. I add a small mention of my website, Facebook page, and logo to my memes in case they're shared. Unfortunately, another fan page on Facebook, Women's Rights News (which has about 100 times more fans than I do and should know better), has shared several of these images, but cropped my info off.


I realize that memes are found all over the Internet and it's hard to know where most originate, but when a meme actually has the originator's info on it, it's just not cool to crop it off or cover it up! I just found out that I'm not the only one -- they've done the same thing to several other great pages, such as Feminists United. I can't contact them discreetly, since they don't have a website and they've disabled private messaging and posting to their wall on Facebook, so the only thing left is to comment on their posts, which they ignore. So Women's Rights News, since you've left me with no other recourse and since you clearly follow my page, my latest original meme is dedicated to you! 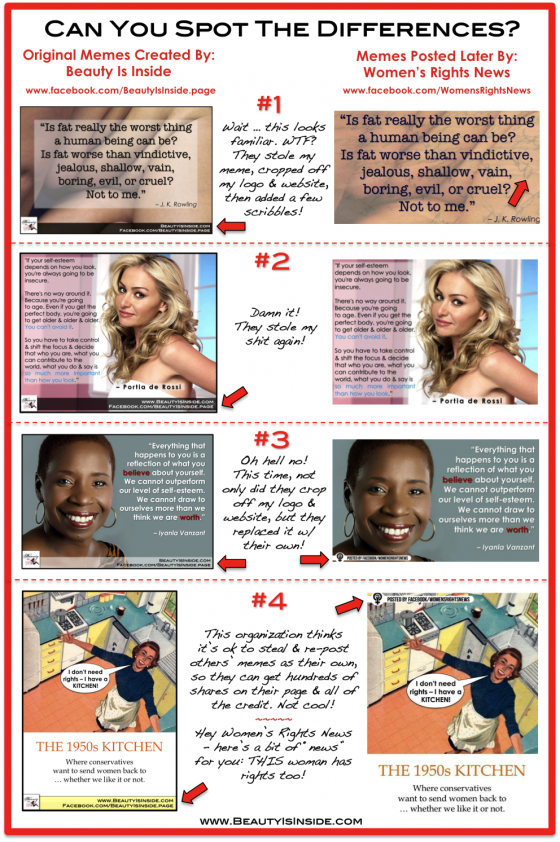 Here are links to the above memes, which were posted previously on Beauty Is Inside:

Beauty, Body Image, Celebrities, Images by Beauty Is Inside, Politics, Reproductive Rights, Self-esteem
Worse or Better
This Is a Bitch