It’s a Nipple, Not a Pepperoni 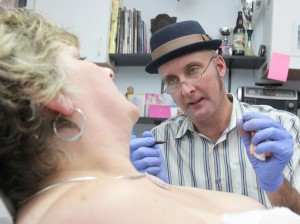 A talented Maryland tattoo artist has made a name for himself as an expert in a valuable niche. Vinnie Myers started out tattooing fellow soldiers in Army boot camp, but has since devoted his business to helping breast cancer survivors. These customers are looking for more than a cool new piece of artwork to decorate their bodies -- these are women who just want to feel whole again:

"[Vinnie] has perfected the three-dimensional nipple tattoo, restoring a final mark of femininity to at least three women a day, who have come from as far as Saudi Arabia and Brazil to Vinnie's Tattoo Parlor ... 'The industry standard has always been draw a circle where the nipple should be and color it in,' Vinnie said. 'When I first started doing it, I said to myself: Why should I do a tattoo of a nipple and make it look like a pepperoni, when I can make it look like a nipple?'"

What keeps Vinnie's work from looking like pepperoni is his attention to detail:

"Vinnie took a peach-colored Sharpie and drew concentric circles where the areola, the dark area around the nipple, and the nipple itself ought to be. First on her right breast, then her left. ...

Vinnie first tattooed in the lines of the two circles, then started shading the areola, making his way to the nipple itself. He also took special care to do what are called Montgomery Glands, the little raised dots in the areola.

Creating a three-dimensional image, the appearance of a raised nipple, is all about using light, shadow, and color to create illusion. This is what distinguishes a gifted artist."

Vinnie has helped hundreds of women feel normal again after losing their breasts to save their lives. His artistic talents enable his customers to see what look like "healthy normal breasts, with fabulous nipples."

"About 290,000 women will get diagnosed with breast cancer this year. About 50,000 will get reconstructive surgery, and 90 percent of those get some sort of areola. But it can be unsatisfying, with no image of a nipple. Furthermore, says Vinnie, surgeons often use vegetable-based dyes that fade quickly."

Although insurance companies will cover the cost of nipple/areola reconstruction, it's often difficult for a patient to collect without a fight. Fortunately, Vinnie charges only $400 for his services, which makes the cost less financially restrictive for women who've already fought enough.

Check out Vinnie's website with several before-and-after photos of his work. NSFW, for obvious reasons.