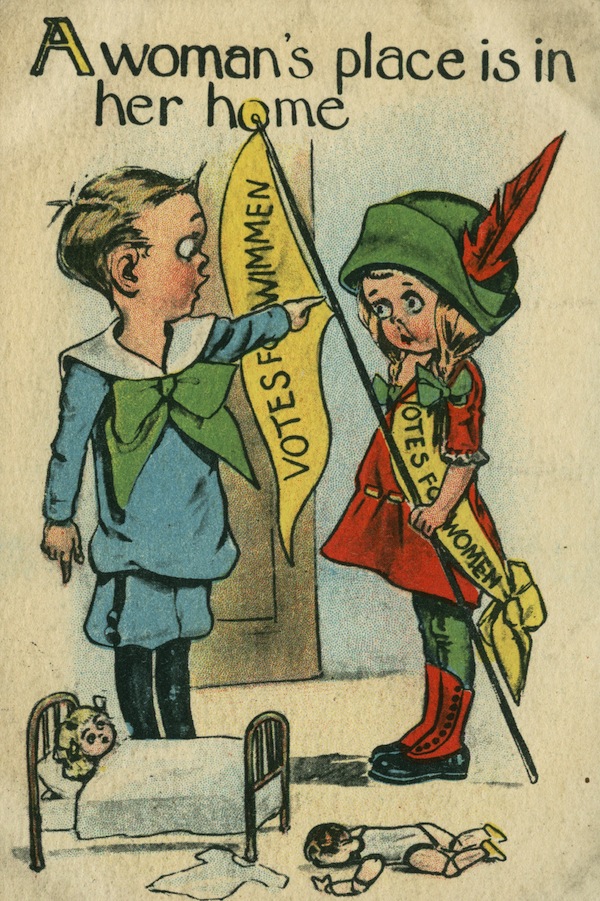 The conservative social forces conspiring to roll back the clocks on women's reproductive rights have much in common with the forces that tried to keep women from having voting rights. In an attempt to undermine suffragettes' struggles to gain rights that men were able to enjoy, these women were demonized as ugly, masculine, bad mothers, morally challenged, promiscuous, childish, and emasculating to men. Nearly 100 years have passed since then, but not much has changed:


The battle for suffrage wasn’t just about the legal right to vote, but it was also about women’s ability to be public figures, not confined to the home. It was more broadly about women’s role in society. ...   "The messages you find on anti-suffrage postcards from the 1910s are not dissimilar from what you might hear from Rush Limbaugh or Bill O’Reilly today in the 2010s. Suffragettes were drawn as conniving coquettes, ugly, mean spinsters or, worse, ugly, mean wives who left their families helpless as they attended town-hall meetings. ...   “That was a common theme, that if women were given political power they would crush men and upset the gender roles in society, particularly in the family. ...   “We operate with this zero-sum mentality, which is, if women gain rights, men lose them. ... You see the same sort of idea that if people of color or ethnic minorities make gains, whites therefore lose something. So if men only understand their identity in relationship to being bigger than women, then it’s a trade-off. You see it in dozens of anti-suffrage postcards, showing men being hurt if women advance. Human beings seem to operate with this mentality where if you expand the rights of some, it diminishes the rights of others, instead of collectively expanding the rights of all of us as a people.”