A 20-year-old Brazilian student plans to auction off her virginity to the highest bidder. Catarina Migliorini will be filmed for an Australian documentary called "Virgins Wanted". The money raised will be used to build homes for poverty-stricken families in Catarina's home town of Santa Catarina, Brazil. Here's the bidding history for the budding sexuality of Catarina from Santa Catarina: 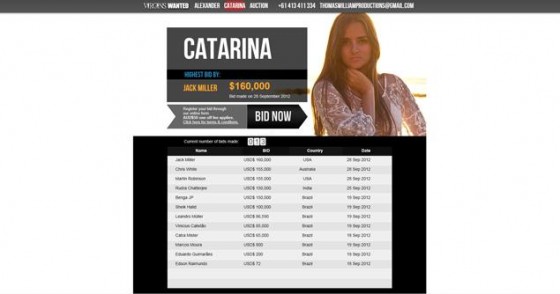 (And to think I gave mine away for free to my manipulative loser of an ex-boyfriend. Maybe I could've put out and put it to better use?) :/

The encounter "will take place on an airplane flying between Australia and the United States, in a bid to circumvent prostitution laws." The mile-high club. How very clever. So, does that mean there's no law in the skies? In that case, I'm totally sneaking into first class next time I fly! You know, since I'd be in the air, I'll be able to circumvent those laws about having to pay for things.

Okay, back to the virgin auction -- let's weigh the pros and cons:
Hmm, I'd have to say that the CONs definitely outweigh the PROs. For the sake of the poor families of Santa Cararina -- and for the sake of poor Catarina from Santa Catarina -- I hope the bidders are more generous than Jack Miller and his measly $160,000. :/

Movies, Power, Sexuality
Being a Princess Isn’t Always a Fairytale
Not Scarred on the Inside