There's been a lot of talk recently about religion in politics. From employers seeking religious exemptions for contraceptive coverage in health insurance premiums to pharmacists denying women emergency contraception because it violates their religious beliefs -- it appears that there's an increasingly blurry line separating church and state. And those who try to point out the importance of that line are accused of starting a "War on Religion". 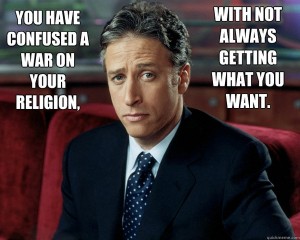 For an increasing number of Americans, this blurring of the lines may very well be giving religion a bad name, making it seem less about loving thy neighbor and more about oppressing them.

One in five Americans report that they don't belong to any religion, according to data from the Pew Research Center. While 79% still identify as religious, those without religious affiliation has risen from 8% to 20% in the past two decades. In the same time, there's been an increasing association between religious beliefs and political affiliation, with white evangelical Christians comprising a large part of the Republican Party and 68% of those with no religious affiliation identifying as Democrats.  According to the Washington Post:

Congregations used to be a blend of political affiliations, but that’s generally not the case anymore. Sociologists have shown that Americans are more likely to pick their place of worship by their politics, not vice versa. ...

'We think it’s mostly a reaction to the religious right,' said Harvard political scientist Robert Putnam, who has written at length about the decline in religious affiliation. 'The best predictor of which people have moved into this category over the last 20 years is how they feel about religion and politics' aligning, particularly conservative politics and opposition to gay civil rights.

America was founded on the concept of religious freedom. But what some people fail to understand is that this doesn't include the freedom to impose their personal religious beliefs on others.  Jezebel writer Lindy West sums it up well:

I am not religious, but I certainly don't care if other people want to be. The only sticking point emerges when people want to use those religious beliefs ... to encroach upon people's legal rights. When religious conservatives attempt to dismantle the separation of church and state (making women's healthcare into a moral issue, for example; or denying gay couples the same legal rights that straight couples enjoy ...), that's when I take issue with religion. When we start getting into conversations like this: