We All Need Allies 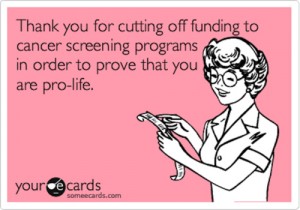 Susan G. Komen for the Cure has just reversed its decision to cut funding to Planned Parenthood "after a category 5 shitstorm threatened to completely taint the brand," as Jezebel so eloquently put it. But the Komen brand has already been tainted by their hypocrisy -- if they're supposedly dedicated to women's health, why would they make decisions that support a political ideology that threatens women's health?

Yesterday, a friend defended Komen's right to withdraw their funding, arguing that they've still done a lot of good with the millions they've dedicated to fighting breast cancer. It wasn't my friend's support of Komen in itself that bothered me. It was that my friend is gay, and he didn't seem to recognize the harm in supporting a group that bends over to pressure from the conservative right.

Komen's good deeds don't erase their bad ones, just as the Salvation Army's charitable work doesn't erase their anti-choice and anti-gay "position statements." Komen's actions are part of an onslaught of right-wing conservative attacks on Planned Parenthood and abortion access in the past year. These are the same people who'd also fight to prevent my friend from getting married. In fact Karen Handel, Komen's senior vice president for public policy and the one who's been credited with making the decision to cut ties with Planned Parenthood, is also a bit of a homophobe. As the Metro Weekly reported:

During her 2010 Republican bid for Georgia governor, Handel supported defunding Planned Parenthood as well as outlawing gay adoption and criminalizing same-sex marriage statewide. In an interview with 11alive, an NBC affiliate, she was interviewed about her view on same-sex relationships:

Q:  You have said that you are -- you're against gay marriage, right?

Q:  Are you against civil unions for gays?

A:  Yes. I think that's not an issue that has come forward in Georgia. We have the constitutional amendment against gay marriage, and I don't want to see any taxpayer funding going toward benefits etcetera for a couple that is not married. In our state and for me, marriage is for one man and one woman.

We all need allies.

One hundred years ago, there were plenty of men who weren't too keen on allowing women to vote -- let alone run for office -- a right that Handel now takes for granted. But there were enough male allies to turn the tide. It's infuriating when those in positions of privilege fight so hard to deny minorities these basic rights. It's depressing when others turn the other way and let it happen. But it's a damn shame when fellow minorities throw each other under the bus by failing to recognize that we're fighting similar battles. We all know what it feels like to have our rights determined by the majority. We're in the same damn boat. None of us should be willing to let another one sink.

Harm against one is harm against another. We all must remember this ... for the cure to oppression -- no matter the type -- is to fight it together.