In contrast, pimpin' is a compliment. A pimp is cool -- he's got money, nice clothes, a fancy car, and all the whores. If you search Google images for "pimp," you'll find pictures of rappers holding wads of cash; flamboyantly-dressed guys doing "pimp walks" in fur coats, big hats, and gold chains; pimps surrounded by scantily-clad hos; and ads for MTV's "Pimp My Ride". Even the pimps' violent language against women is mainstream (e.g., "bitch-slap," "smack that ho," "you're my bitch," etc.). Pimps are celebrated -- they have money, power, and control. They represent another concept that our culture celebrates: capitalism.

The concept of john is neither demonized, nor celebrated -- his role is largely ignored. Boys will be boys (and some boys will be johns) who are driven to seek out sex (in secret, hidden away from wives, girlfriends, or work buddies). A john is just a nameless, faceless customer. He's not particularly shamed like the whore, even though he's vital to the transaction. A john doesn't have a strong pop cultural presence. No one's ever going to "john their ride," nor are they ever accused of "johnin' themselves out". A Google image search for "john" brings up ... just a bunch of pictures of guys named John. 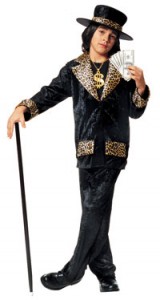 and demonize the whore –

Here's a real-life "Pimp & Ho Party": Teenage girls running away to escape homes filled with physical, emotional, or sexual abuse. Forced to live on the streets in bad neighborhoods and sell their bodies, because there aren't many other options. Lingering on sidewalks waiting for potential customers prowling red-light districts in search of anonymous sex. Bending into lowered passenger-side car windows to negotiate bargain-basement-blowjobs with strangers. Risking sexually-transmitted diseases, sexual assault, and violence in exchange for cash. Sharing nightly earnings and bodies with pimps or risk even more violence. Using some of the cash to buy drugs and cheap alcohol to numb the pain.

Seriously, if you think pimpin' ain't easy, you should try whorin'.