In a recent study, researchers found that 100% of women felt bad about their appearance after looking at beauty magazines for just a few minutes. From one of the authors: “Surprisingly, we found that weight was not a factor. Viewing these pictures was just bad for everyone,” said Laurie Mintz, associate professor of education, school and counseling psychology in the MU College of Education. “It had been thought that women who are heavier feel worse than a thinner woman after viewing pictures of the thin ideal in the mass media. The study results do not support that theory."

I happened upon this brilliant way of fighting back. This was part of a campaign by the National Eating Disorder Information Centre (NEDIC) in Canada that targeted beauty magazines. From NEDIC's website: "To involve the public in our campaign, this transit shelter ad appeals to dieters and those who feel the pressure to diet (virtually all women), empowering them with a way to really shed their weight problem." 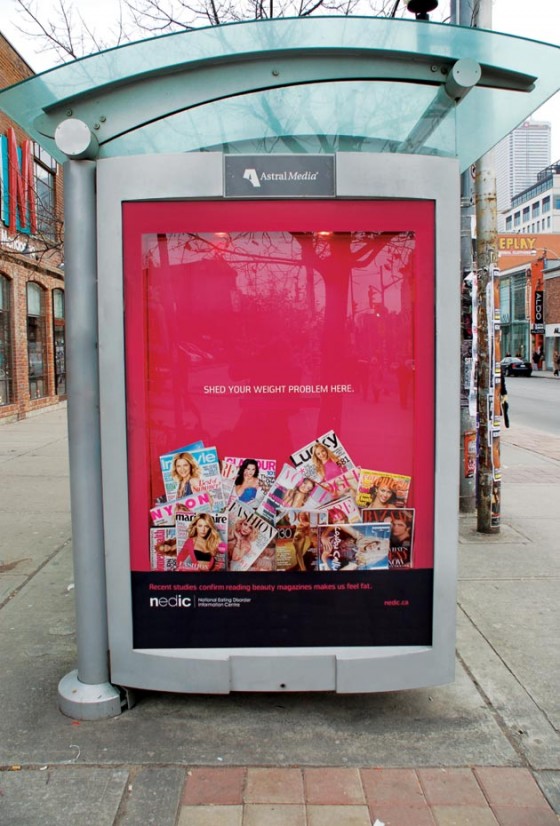 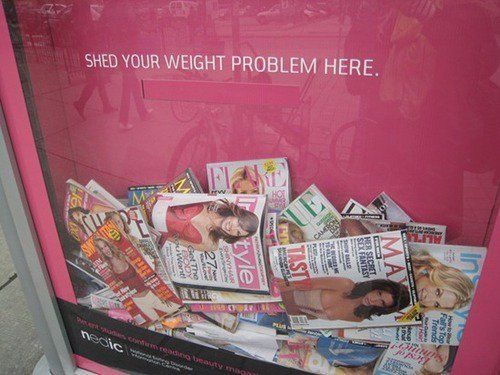 Text at bottom of display:

Another study demonstrated "... the role of the media in shaping, rather than merely reflecting, societal perceptions of the female body. Consistent with our hypothesis, it was found that women's body image satisfaction is, indeed, influenced by their exposure to the thin ideal presented in fashion magazines."

(Want more? Here's one of my previous posts on this topic.)