Are You a Sell-Out Sister? 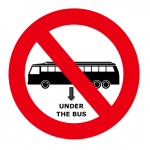 It’s hard to be a woman. So much is expected of us: we need to be the perfect wives/girlfriends, selfless moms/friends/daughters, successful businesswomen -- all while being beautiful and thin. We’d like to think that since other women face similar challenges, that they would support us in ours. We’d like to think that we’d do the same for them. But sadly, this is often not the case. We tend to compete more than collaborate. We pick each other apart with the same critical eyes through which we see ourselves. Deep inside, we think that by knocking her down a few pegs, we might not feel so deficient in comparison. But it never works. In subtle ways, Sell-Out Sisters sabotage the collective power of us all. It’s not just the mean girls who’ll throw a fellow sister under the bus.

30 Signs of a Sell-Out Sister:

I had just finished writing this post when I received an email forward from someone close to me. It was a perfect example of a Sell-Out Sister. The woman who sent me this has been morbidly obese for much of her life. Since she was a child, she's been ridiculed and treated poorly due to her weight, and this treatment continued into adulthood. This makes her selling out particularly sad.

Just imagine what women could do if we worked together instead of against each other.