Rush Limbaugh has been all over the news since his misogynistic rant about Sandra Fluke, the Georgetown University law student who testified before Democratic members of Congress about birth control coverage being a necessary part of women's health. His rant went on for over three days, during which he called her a "slut" and a "prostitute," along with about 50 other insults. Apparently, each of those insults has now cost him an advertiser, as 50 of them (so far) have pulled their ads from his show. Granted, one must wonder why they ever decided to advertise with him in the first place. As a man who regularly spews sexist manure and the one who coined the term "feminazi," it's obviously not his first sexist rodeo. However, this time enough people grabbed the bully by the horns and put pressure on his advertisers to try to make it his last.

After several advertisers initially dropped him, he made a half-assed apology to Fluke, during which he just reiterated what he'd previously said. At that point, you'd think he might slither away from sexist rhetoric until the heat went down ... but nope. Just last week, he made demeaning comments about author Tracie McMillan, including calling her an "authorette" and stating: "What is it with all these overeducated white women?"

Actually, what is it with all these sexist and ignorant old white men? Clearly he's threatened by "overeducated white women" and "feminazis" -- and rightly so. We tend to think women should be treated with respect and fairness. And when we're called things like "slut," "prostitute," "overeducated," and "feminazi" by a cave-dwelling radio personality, we're likely to call him on his shit. 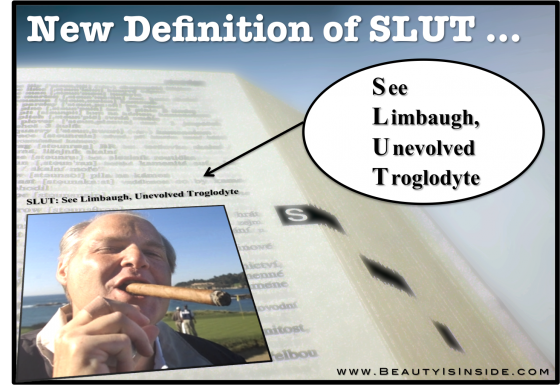 The most disturbing thing about Limbaugh's vile comments are that he isn't alone. Attitudes such as his underlie legislative and religious efforts to politicize our reproductive health and police our sexuality, and they also underlie violence against women in general. It's all about control. The attacks on reproductive rights aren't even about birth control -- they're about woman control. And words like slut are used to shame us, silence us, and put us back in our places.

One thing that cave-dwelling troglodytes are good at is lighting fires. And Limbaugh certainly lit a big one this time.

Referring to a woman as a "slut" and a "prostitute" for sharing her beliefs about birth control, saying that ”she wants you and me and the taxpayers to pay her to have sex” and that she should post a sex video as repayment -- these statements aren't merely the sexist tirades of a bloated blowhard -- these are inflammatory comments on a grander

scale. They contribute to a culture in which demeaning women is normalized. He's fueling the fires of those who share his misogynistic views, fueling their anger toward women for being immoral sluts because they dare to have sex without shame. He's fueling the justifications of those who see women as sexual objects who owe them sex. He's fueling the anger at women who dare to turn down sexual advances. He's fueling the claims that women ask to be harassed or raped because of how they act or dress. These words fuel the fires of those who share the opinion that women should have no voice, that we should be silenced so that we can't challenge their dominance. These are the beliefs underlying the verbal attacks by trolls on online comment boards when a woman dares to speak her mind. And these attitudes are the beliefs underlying more severe misogyny.

These words aren't uttered in a vacuum. Especially when they're uttered by a media personality with millions of like-minded viewers. Violent actions are precipitated by violent beliefs. In the same way that a disease epidemic affects the weakest members of society first, so does inflammatory rhetoric. Limbaugh reinforces the beliefs of those listeners who share his sexist views; those who have anger issues, antisocial personalities, or other psychological disorders may indeed act out that misogyny. His words fuel their beliefs and their justifications for treating women as objectified less-than-human beings. Thousands of women in this country are physically and sexually assaulted not only by strangers, but also by men they know, including their own partners. Men who see women as equals and deserving of respect do not generally beat and rape women. They also don't call us sluts or prostitutes or try to control our bodies.

A disturbed person may be the one who ultimately lights the match, but vile-hate-spewing-"entertainers" like Limbaugh are the ones providing the gasoline. And both need to be extinguished.